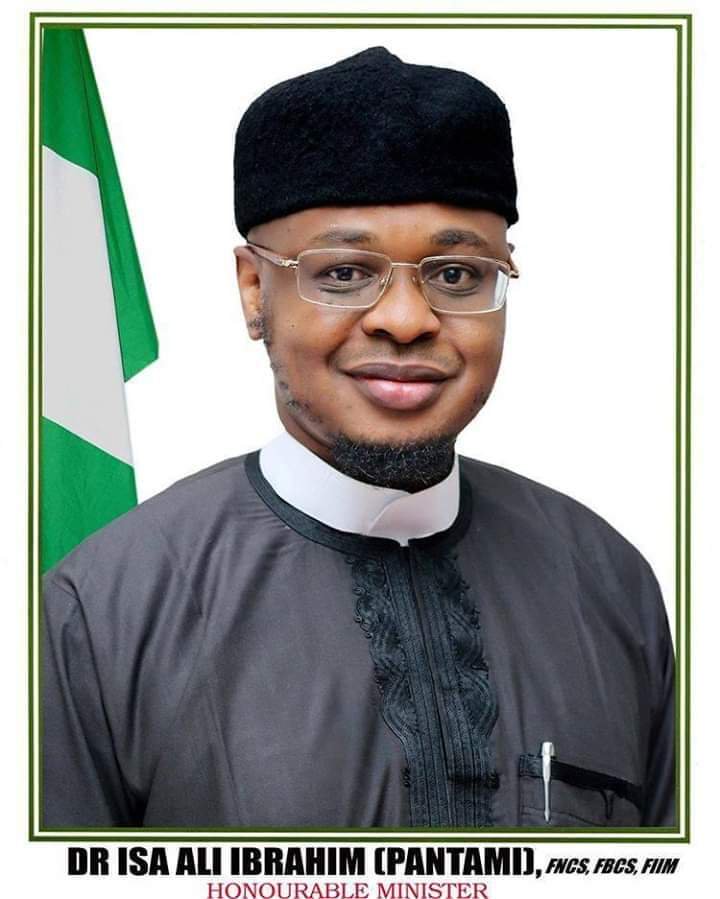 Dr Isa Ali Ibrahim (Pantami) is the Honourable Minister of Communications and Digital Economy of the Federal Republic of Nigeria. Dr Pantami obtained a Bachelor of Technology in Computer Science (B.Tech), from the Abubakar Tafawa Balewa University (ATBU), and proceeded to   acquire two Masters Degrees from the same institution in quick succession. One in Computer Science (MSc) and the other, an MBA in Technology Management with flying colours. His scholarly pursuits then led him to the renowned Robert Gordon University Aberdeen Scotland, where he bagged a Doctorate in Computer Science (PhD), specialising in Computer Information Systems.

Prior to his appointed as a Minister, he was the Director General (DG)/Chief Executive Officer (CEO) of the National Information Technology Development Agency (NITDA). He is currently the Chief Digital Officer of the Federation, based on the National Policy for Virtual Engagements in Federal Public Institutions. He has also been a member of several Presidential and Inter-Ministerial Committees including Committee on Citizen Data Management and Harmonisation, National Committee on Export Promotion, Digital Identity Ecosystem Steering Committee, National Action Committee on African Continental Free Trade Area Agreement (AfCFTA). He was also appointed as AfCFTA Champion for Communications and Digital Economy.

Under the leadership of Dr Pantami, as the first Minister of Digital Economy, a National Digital Economy Policy and Strategy and National Broadband Plan were developed and many unprecedented successes recorded. In less than a year as the Minister of Communications and Digital Economy, the lingering issue of excessive Right of Way charges and vandalism of telecommunication infrastructure have been effectively addressed. Under his stewardship, broadband penetration increased by about 10% in a year, instead of the average annual increase of about 1.7%, and ICT contributed an unprecedented 17.83% to the GDP based on the Q2 2020 GDP Report by National Bureau of Statistics. At 14.70%, ICT was also the fastest growing sector of the Nigerian economy in the 4th Quarter of 2020. He initiated the first Virtual Federal Executive Council meeting on the 13th of May 2020 and has been coordinating the technical aspects of the meetings since then.

Dr Pantami also holds certificates in Digital Transformation from Harvard, Digital Strategy from both Massachusetts Institute of Technology (MIT) and Institute of Management Development Lausanne, Switzerland, Strategic Leadership from Oxford University, and a University of Cambridge Certification in Management. The dynamic, inspirational agent of transformation, is also a conflict resolution expert with national and international experiences in that regard.

Dr Pantami is a recipient of several global awards and is a well sought after speaker, delivering convocation lectures in a number of public and private universities, including the Federal University of Technology Minna, the Nile University, the Federal University Kashere and the National Defence College. He has also served as a Keynote Speaker in leading global events like the Gulf Information Technology Exhibition (GITEX) in Dubai and the GSMA Africa Policy Leaders Forum, amongst others. He is the Champion of the Massachusetts Institute of Technology (MIT) Regional Entrepreneurship Acceleration Program (REAP)- a global initiative that helps regions accelerate economic growth and promote social progress through innovation-driven entrepreneurship (IDE). He has visited about 30 countries.

Dr Isa Ali Ibrahim (Pantami) who is popularly known as the Digital Minister, is a global IT citizen, a revered and highly respected Fellow of the Nigerian and British Computer Societies, and is happily married with children.