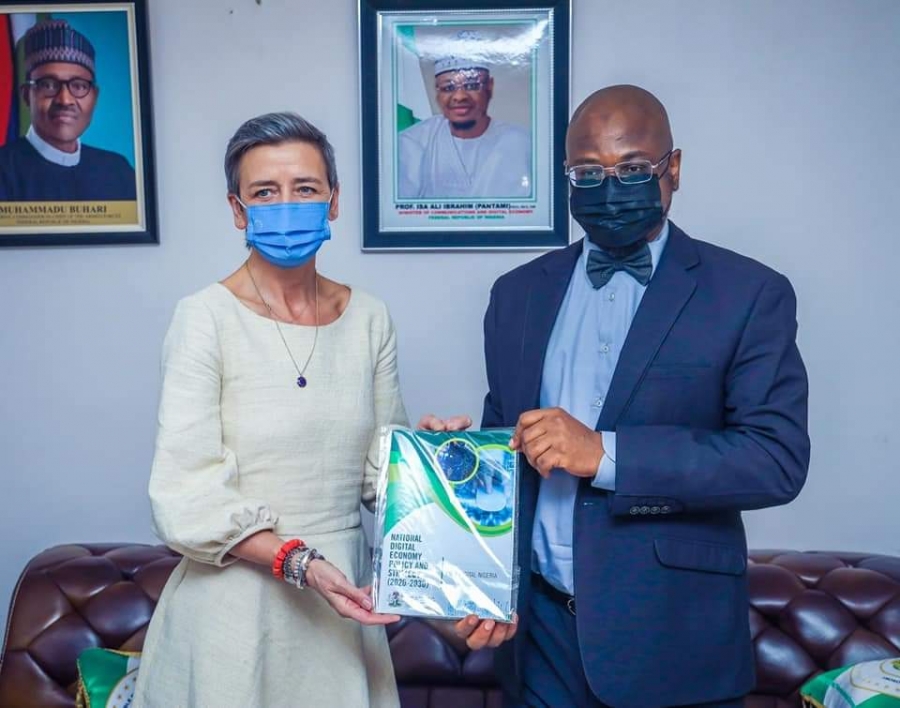 The European Union (EU) under its Gateway Initiative has disclosed plans to invest about Eight Hundred and Twenty Million Euros in the Nigerian Digital Economy sector over the next three years. This disclosure was made today Monday, 14th February 2022 by the Executive Vice President of the Union Her Excellency, Margrethe Vestager during a working visit to the Honourable Minister of Communications and Digital Economy, Professor Isa Ali Ibrahim (Pantami) at the Digital Economy Complex in Abuja.

Mrs Vestager while extolling the exemplary leadership style of the Minister, noted that this, and the need for stronger partnerships has brought global attention to the country’s Digital Economy sector. She enumerated the Union’s intervention in the sector to include; Digital Infrastructure Investments, Digitalisation of Public Services, Digital Entreprenuership, Digital Skills and Digital Governance.

In his reponse, Professor Pantami while expressing his delight and appreciation for the intervention reiterated the Federal Government’s willingness to partner with the European Union.

“Africa has always looked up to Europe in the area of technological advancements and this partnership is a welcome development that will project the digitalization aspirations of our country. Professor Pantami was particular about digital entrepreneurship and the immense impact it will bring to bear on the nation’s economy. “This partnership with regards to digital entrepreneurship, will address the challenge of unemployment and unemployability alongside the Nigeria Startup Bill which also aims to address a myriad of issues within the ecosystem.” The Minister further informed the delegation that Nigeria hopes to achieve the paperless office by the year 2030 and it is on track, taking into cognizance the rate at which public institutions are embracing the digital economy drive.

The Europen Union intervention is in alignment with the Nigeria Digital Economy Policy and Strategy (NDEPS), a digital roadmap initiated and championed by Professor Pantami towards the economic digitalization drive of President Muhammadu Buhari (GCFR).